We have a common language: love

Needy people in Oradea helped by German guest-volunteer of Caritas 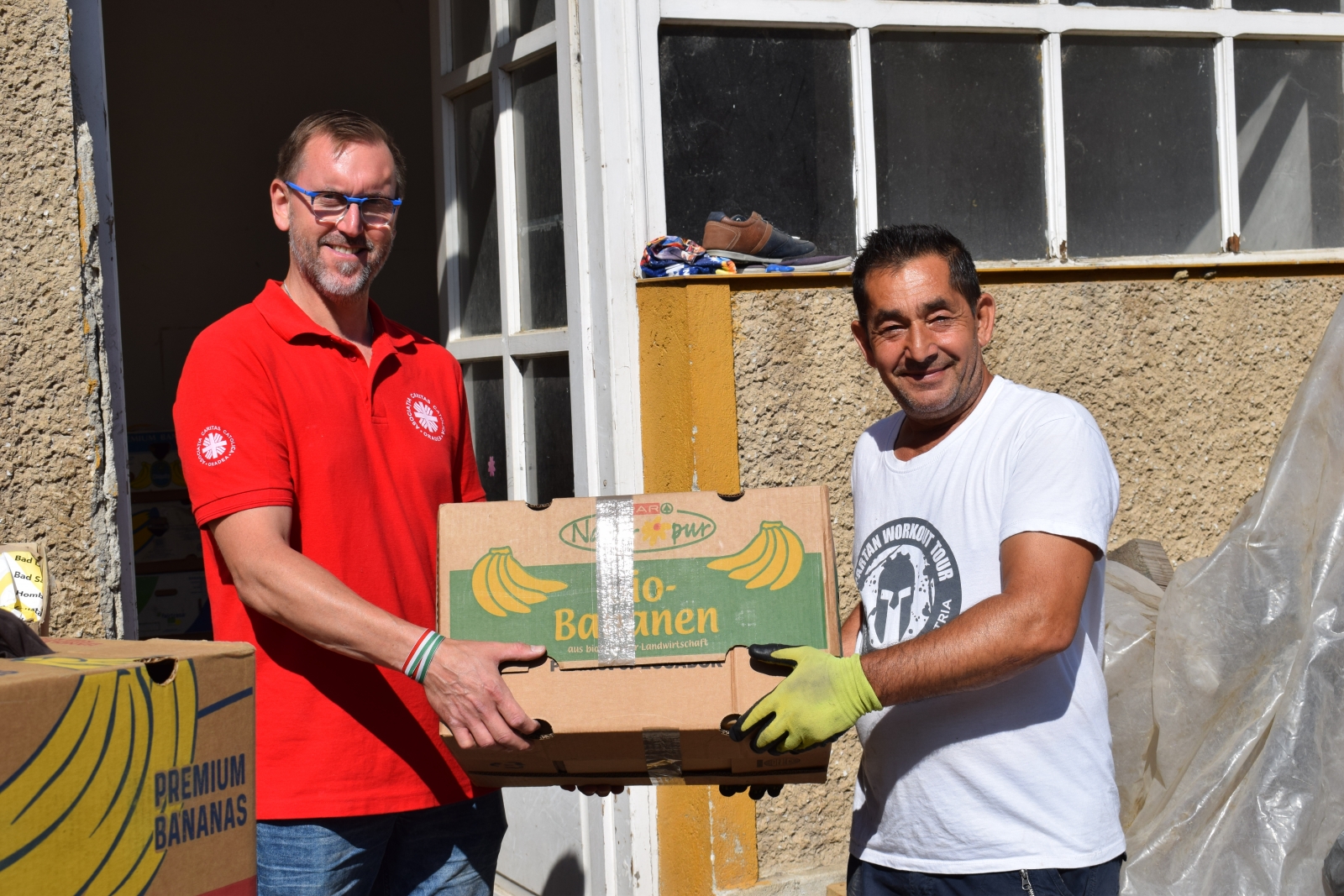 The team of Caritas Catolica Oradea has received an unexpected reinforcement for the summer period in the person of Mr. Rainer Pag, a guest volunteer from Germany, who has dedicated his hard-earned days off to volunteer for several months in Oradea, helping both local communities and Ukrainian refugees. He has been involved not only in charity actions, but also in the background work invisible to the public, from unloading goods and sorting donations, to delivering hot meals and supplying charity shops with merchandise. As he emphasized, whichever department of Caritas he was in, he had no problem making himself understood by the staff and the beneficiaries, because even though they did not speak each other's native language, they still had a common language: love, which made all work easier. We talked to the German guest volunteer about his motivation, experiences and plans.

Rainer Pag's name wasn’t unknown in Oradea until. As a church organizer, he played a key role in the development of a sister-parish partnership between Vreden in Germany and St. Ladislaus Parish in Oradea about ten years ago. Since then, he has sent donations several times, organized collections for Oradea, and once he even made a pilgrimage on foot from Germany to Oradea. This happened in 2019, before the outbreak of the Covid pandemic.

Volunteering instead of hiking

He said he had originally planned a religious-themed pilgrimage for this year, but when the conflict in Ukraine erupted, he decided to come to Oradea instead, in order to support the refugees who were crossing the border and the organizations that helped them. And although the refugee wave has calmed down in two months, Rainer did not deviate from his original plan and he stayed in Oradea throughout the summer, strengthening the Caritas team so that he could get acquainted with many other aspects of social assistance, from homecare to soup kitchens and elderly homes. At the end of the school year, he took the joint donations of Caritas and the National Food Bank to the Lucretia Suciu School, which is mainly composed of Roma children, but he has also distributed hygiene kits at the homeless shelter, visited the home-care patients of the diocese, delivered lunches to the elderly, and even attended a camp for Ukrainian youth as a helper in late July.

From carpenter to sacristy and pilgrim

Rainer Pag was born in the province of Westphalia, close to the Dutch border. His father was a polish war refugee, who emigrated to Germany after WWII. His mother was a German housewife, occasionally taking jobs as a factory worker, while his father worked on construction sites. From an early childhood, little Rainer was given a religious upbringing. "It was mandatory to go to church. It was also an important family program" – he recalled.

He later graduated from vocational school and worked as a carpenter for about ten years, then, listening to his inner impulses, he changed careers and became a sacristy and then a group leader in the local parish, where he has been working continuously for 25 years since then. Reflecting on his job, he emphasized: "it's not just a job, it's a vocation. A lot of times you have to volunteer, organize, build relationships between people." He became involved in volunteering while working as a group leader, and later on, through diocesan pilgrimages, he started to love hiking and making longer pilgrimages by foot.

He spent this summer serving those in need as a volunteer for Caritas Catolica. Most of it worked at the central depot, where foreign aid shipments arrive. As he said, it was a whole new experience for him. Although he was involved in the compilation of several aid shipments in Germany, he was now able to learn about the other side of the work, at the organization that receives the donations, where donations have to be unloaded, sorted, stored and passed on. „It was now that I really understood how much work the receiving organization has to do, and also that a part of the shipments are of unusable quality. Given the situation here, I find it even more a waste to see a lot of things thrown away in Western countries instead of passing it on to a place where they can help" – he said.

Where an NGO does the work of the state

Reflecting on the conditions in Romania, he said he was deeply touched by the condition of the poor people, especially elderly with small pensions, to whom he delivered lunch or visited them within the homecare service. "Most of them have worked their entire life and yet now their pensions are so low that they can barely afford the essentials and live in apartments in poor condition with sparse lighting, with crumbling plaster" – he recalled with sadness.

"The way I see it is that the social divide is very wide open and there is a huge gap between the rich and poor" – he said, then added: In Germany, too, there are people who become disadvantaged at old age, but there the state takes better care of them, while here in Romania Caritas does what would actually be the state's job.

It matters how people approach their own situation

Regarding the homecare service, he recalled two specific cases that affected him. One of them was a man whose one leg was amputated, he was completely discouraged, did not care about himself and lived in garbage and misery. He had once worked abroad and was doing well, but now he has suffered a bad fate, which he experiences as constant suffering. The other case was a man blessed with an artistic vein who has suffered from sclerosis since he was in high school and wrote more than 400 poems – although, most of them are just for the desk drawer. He lives in very modest circumstances, yet he is satisfied with his life, despite the fact that he has cumulative health problems. He said he feels he has done what he had to do in life and is trying to enjoy the time ahead. His positive thinking was also reflected in his surroundings: his apartment was poor, but clean and neat. It has a completely different vibe than the other man's apartment. “It matters a lot how individuals approach their own life situation” – Rainer pointed out.

Visiting the homeless shelter on Gutenberg Street, some of the residents there knew a word or two in German and happily addressed the Caritas volunteer. Even if their sparse vocabulary consisted just of a "guten Tag" or a "wie geht's?" they eagerly repeated these words, and it filled them with extreme pride that the foreign guest understood them and answered them. "It was our common language, the language of love, and that put us on the same wavelength, even if we could only exchange a single word with each other" – Rainer said of his experience.

As a foreigner who sees us with a fresh eye, we also asked him to highlight 3 positive and 3 negative things about his Romanian experience. On the negative side, he highlighted traffic, which, in his opinion, is terrible in Romania by car, by bicycle or by foot. „Everyone just wants to get where they're going as soon as possible, but they don't care that there are others around them.” – said Rainer, who on the first day of his stay in Oradea, was sprayed from head to toe with pond water by a car speeding through a puddle on the side of the road.

He also mentioned garbage in public spaces as an undesirable phenomenon. As he pointed out, even in Hungary there is a lot of rubbish on the streets, but Romania is even worse. During his walking pilgrimage, he observed that more and more rubbish was encountered as he made his way eastwards in Europe. He also found public transport to be trashy and dirty, which he said were not well maintained.

On the positive side, however, he pointed out far more important things. He said that before he went on his pilgrimage, many people warned him to be careful with people from Eastern Europe because they have a different mentality, he could be robbed, he could get into trouble. But he experienced the exact opposite. "People were immensely hospitable wherever I went," he said. In addition to the kindness of locals, he also highlighted the beauty of the natural landscapes, as he had the opportunity to go on excursions in the Körös region and in the Transylvanian mountains. As he said, the landscapes are picturesque, although in some places the overall picture is also spoiled by garbage.

He also pointed out as a positive that the people here don't live under as rigid rules as those in Germany. Although this may be a negative in the eyes of many, he still firmly states: it was a pleasant experience that the work included a little slack, an unplanned break, or sometimes a delay, which was completely unusual for him. As he pointed out, all the work was still carried out, but in a more relaxed atmosphere.

When asked what motivates him to continue volunteering and philanthropizing in the world, the answer was quick and self-evident: his faith, his beautiful girlfriend, and peoples love for each other. „Faith, hope and love – these are typical of a believer's life and I experience them in my daily activities, because I have shaped my entire life around this, not so consciously at first, but later out of conscious determination," he said, adding that he does not know what the future will bring, but he is sure that he often wants to return to Oradea and continue charitable work. We have a common language: love